Wherever men exist in a perfectly civilized and healthy state, they have vegetation around them; wherever their state approaches that of innocence or perfectness, it approaches that of Paradise – it is a dressing of garden.
John Ruskin, The Stones of Venice

Imagine living in a home where you are surrounded by the beauty and the fragrance of an orchard; a home where, at any time of the year, you can harvest breakfast from the walls; a home which supports the entire cycle of plant life from seed to fruit to pie to compost. This is the heart of our vision for The Orchard, a modest two-bedroom house that we are building in south London.

The pioneers of the Arts and Crafts movement certainly understood the importance of nature to the quality of our everyday lives. Ruskin may have set the ball rolling but it was William Morris and Edward Burne-Jones who caught the public imagination in the middle of the nineteenth century, bringing together a love of nature with a passion for beauty and a determination to sustain traditional craftsmanship, the bridge between human sweat and the realisation of beauty. As Morris put it, "that thing which I understand by real art is the expression by man of his pleasure in labour."

There's a lot of labour involved in a self-build project and not all of it is going to be a pleasure. Nonetheless self-build is a fantastic opportunity to engage in the physical business of making things. Following the inspiration of the architects of the Arts and Crafts movement, for whom every project was a new canvas for the traditional building crafts, we want to create a home where the building crafts shine: richly detailed and alive with the beauty of natural materials. 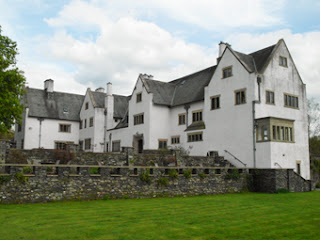 There is no singular 'Arts and Crafts' style in building. Architects of the movement shared ideas not pattern books. However a common interest in the traditional architecture of England informed their work: old farmhouses and cottages expressed both the wisdom and the skills of traditional building craftspeople. They were truthful, functional, unaffected, hand-crafted and built with local materials. 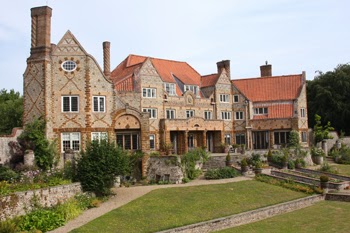 From this starting point, architects went in quite different directions. The  two houses illustrated here, Blackwell in Windermere by Hugh Baillie Scott and Voewood in Norfolk by Edward Prior, share a common language, drawn from the vernacular, of steep roofs and prominent gables, and both use local materials: slate and roughcast in Cumbria, flint and brick in Norfolk. But their differences are just as striking: Blackwell is distinguished by its changeful form, simple finishes and clarity of internal layout, whereas Voewood has a butterfly plan and celebrates the decorative possibilities of its materials in every detail. These are not exercises in nostalgia but genuine attempts to reinterpret the English vernacular for a new era. New methods of construction were not ignored: Voewood has a concrete frame.

The design of The Orchard is inspired by Deanery Garden in Sonning, Berkshire by Edwin Lutyens. Lutyens began his career rooted in the Arts and Crafts tradition, designing Munstead Wood in Sussex for Gertrude Jeckyll, and ended it in the imperial classical tradition, building Government House in New Delhi (now Rashtrapati Bhavan). Both are masterpieces. Deanery Garden is an extraordinary English fantasy, combining traditional features of English architecture, notably a prominent Elizabethan oriel window, in such a way that the result is sublime and, seemingly, entirely original.

The Orchard is just a little house on a 6 metre wide plot in south London. But we have borrowed Lutyens' oriel for our conservatory, and his arched passageway for our entrance porch, and we plan to have fun with circles in the back garden. The walls will be finished in hand-made bricks from Gloustershire and the windows will be surrounded by blue tiles (a nod to Halsey Ricardo). The creation of the interior will principally call on woodworkers of all types - carpenters, joiners, cabinet-makers, turners - but there will also be work for metalworkers, plasterers, glass-makers, ceramicists and painters. Wherever possible, I intend to have a go myself. I am currently a trainee furniture-maker, hoping to gain the skills to finish much of the interior myself. Consequently the house is likely to take a very long time to complete.

The house will not, however, be officially finished until we harvest the first pears from the espaliered tree that is destined for the warm south-facing brick wall at the front of the building. We are growing fruit everywhere: apples, pears and plums in the front garden; cherries on the roof; every soft fruit you can imagine in the back garden; and peaches, grapes and other tender fruit in the conservatory. The room below the conservatory is an entrance porch, a thermal barbican that prevents heat loss in the winter when people enter or leave the house, but its principal function is a fruit store. We will be planting apples that ripen in storage over the winter so that we can keep plucking fruit from the walls, albeit the walls of the fruit store, all the way through to the spring when the first forced rhubarb is ready to be harvested.

In addition to all these ambitions, The Orchard is being built to the highest possible ecological specification. Above all, it will be such a warm building that our total annual heating requirement will be only about 1,500 kWh (the average in Britain is well over ten times this). This is not easy to achieve but it can be done if you pay attention to every little detail of how heat can escape from a building. This is the approach of German Passivhaus design. We used the Passivhaus energy modelling software while designing the building to ensure that our annual heat load will be no more than 15 kWh per square metre of internal floor area - the principal target of the Passivhaus standard.

There is of course much more to ecological design than keeping the heat in. The Orchard will cope well with all extremes of weather, including heatwaves, without the need for lots of energy to keep it habitable. The limited energy that we do need will be generated on the roof using solar panels.  The building will be built from robust and carefully sourced materials. Rainwater will be collected from the roofs and mains water will be used efficiently. Waste will be recycled wherever possible. As well as providing a year-round supply of organic food, the gardens will contain niches for small-scale fauna as well as flora. And, not least, the house will be a delight to live in and so be cared for and survive as the decades turn. We plan to live in it for the rest of our lives. But that will just be the beginning.