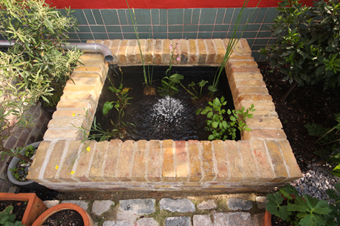 The hard landscaping of the back garden is finished 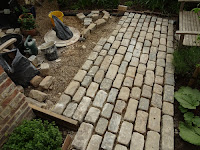 I've been working on the back garden since long before we started building the house. I built the back wall, cleared the land, imported lots of good muck, laid out the paths and even planted a few trees at the edge before we laid the foundations for the house itself. It's taken a long time to finish the last details but this weekend I installed the pump that runs the fountain of our new raised pond, completing the picture. 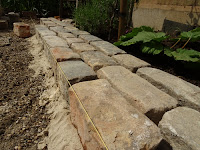 The final leg began a year ago when I started laying the heavy granite setts that I managed to persuade the builders across the road to give me (they were demolishing what was once a brewery). This was not an easy task as they were big, heavy and all different sizes and depths. I used a string line on a slight slope away from the house to keep everything just so. 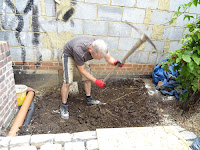 Then, below the concrete block wall on our northern boundary, I dug a hole and laid foundations for a raised pond. I laid a couple of courses of concrete blocks below the level of the setts, then carried on up with left-over bricks from the house (red) and back garden wall (yellow), picking out a simple pattern in Flemish bond. 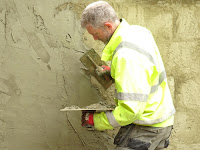 Returning to the task after the winter, I rendered the wall and, while the render was still wet, created an exploding mosaic using fragments of broken Victorian ceramics. We collected these from a beach in Kent where a long-derelict Victorian brickworks was once  supplied with fuel from the dust barges of London, which brought not only the remnants of a million open hearths to be refired but also the remains of thousands of domestic accidents and arguments. The design aims to capture something of the energy with which all these plates and saucers and teacups met their end. 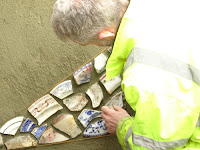 I limewashed the wall using a mixture of pigments that included a late entry that adds a particular intensity to the finish: cadmium red.

Finally I rendered the inside of the pond, painted it with a waterproof finish and completed the plumbing. The pond is fed with rainwater from the roof and overflows into the 1500 litre water tank beneath our new patio, from where I can pump water pack into the pond when needed.

The plants and the fountain were the final touch. There ain't nothing like a tinkling fountain on a hot afternoon in May. 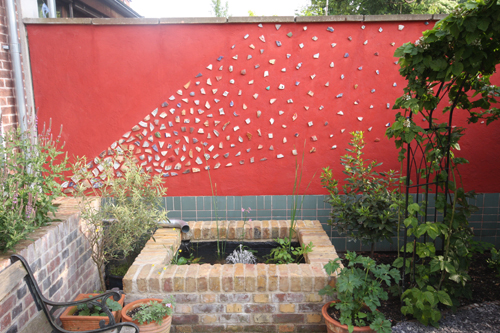 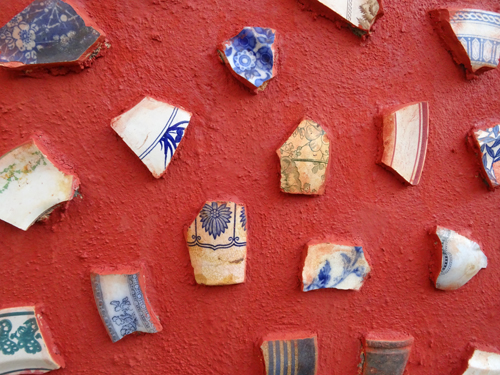