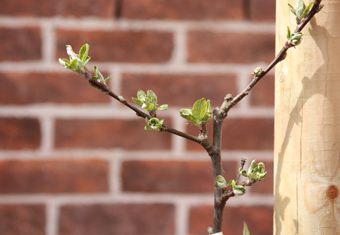 And the orchard is planted


As you may have gathered, we're not great fans of deadlines on this project. We just plod on, content in the knowledge that we will eventually get there. Nonetheless, deadlines are occasionally thrust upon us, and spring is one of them. For this is the very last moment in the year when dormant bare-rooted trees can be lifted and planted. So I have been working hard over the last two weeks to prepare and plant the miniature orchard in our front garden before the opportunity is lost for another year. 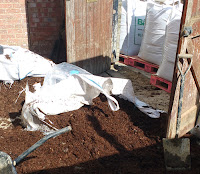 There was never much soil to speak of at the front of our site, which was previously used as a hard standing and garage, and over the past two years we have thoroughly abused what little there was. So the first task was to dig out and remove a foot of compacted clay, rock, concrete and rubbish. I replaced this with two tons of gravel, two bulk bags of horse manure and three tons of quality Norfolk topsoil. By the time I had shifted the topsoil from the pavement where the pallets were dropped and barrowed it all into the waiting holes, my back was properly sore.

I was, however, cheered up by the arrival of the trees: one crabapple, five pears and 14 apples. They are all on dwarfing rootstocks, the aim being to produce relatively small crops of many fruit across the longest possible harvest. The design is two concentric circles. The inner circle is comprised of six apples which I hope to train as dwarf pyramids. The trees in the outer circle, planted much closer together, will all be trained as vertical cordons (minarettes) with the fruit clustered close to the central trunk and minimal outward growth. Down the side of the porch, where we have our only south-facing wall, I have planted a fig, suitably hemmed in by a fig pit to keep it fruitful. The edge of the path has been planted with bee-friendly flowers such as hyssop, cone flowers and salvias.

It is of course a great moment to finally have an orchard at the front of The Orchard. Hopefully my pain will deliver many years of gain as the trees mature and their roots enjoy the riches I have bestowed upon them. Here, for the record, is what I planted. Each circle ripens in clockwise order as follows: 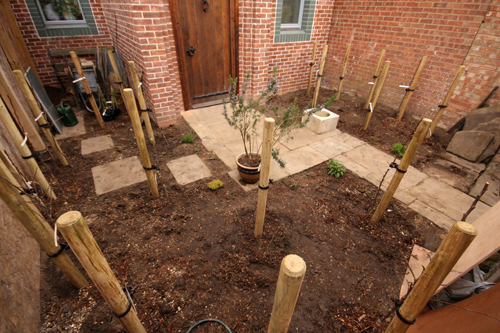