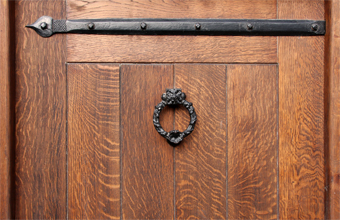 Our front door is in. 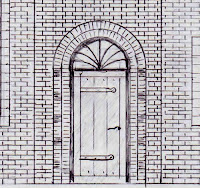 Three years ago, after being told by a planning officer that we could design whatever we wanted for our site as long as it was high quality, I sat down and drew the Arts and Crafts fantasy that was to become The Orchard. Right in the centre of the house I drew a commanding front door, a great work of joinery made from wide quarter-sawn oak boards and finished with chunky metal straps, the kind of door that would happily grace a traditional Cotswold manor house.

Sometime later, while web-browsing the stock of Cox’s Restoration, based in Moreton-in-Marsh in Gloucestershire, I spotted the door that I had drawn. Needless to say, I bought it without a moment’s hesitation. Apparently it came from a local manor house.

Nearly two years later, the door has finally been installed. We have been able to live without it because the door opens to an internal porch that is outside the insulated envelope of the building. There is another door beyond this room – an airtight modern door – that takes us into the heated part of the house. The inclusion of this traditional ‘buffer space’ between the outside and the heated inside contributes to the energy efficiency of the building because it acts as a barbican: when people come and go the doors can be opened and shut in turn, preventing the cold air outside rushing into the warm house. 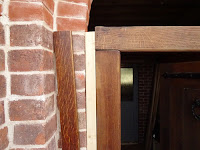 The door came with its own frame but this didn’t quite fit the hole we had built for it, so I packed the gaps on either side with some softwood and then went in search of some similarly-coloured antique oak for an architrave to disguise all the joins between the frame, packing and brickwork. I went to Lassco’s at London Bridge and, after a good rummage, came away with an old pew seat. I took this home on the bus, measured up extremely carefully, got the plunge saw out, and the job was done.

The door hangs on simple cast iron hinges and is a joy to open, close and behold. The straps are beautifully detailed, seemingly growing out of heart-shaped seeds, and the patterns in the oak boards in the middle of the door remind me of the depiction of time travel at the beginning of Dr Who. Which is appropriate, I think, for a portal to a newly-built Arts and Crafts ecohouse. 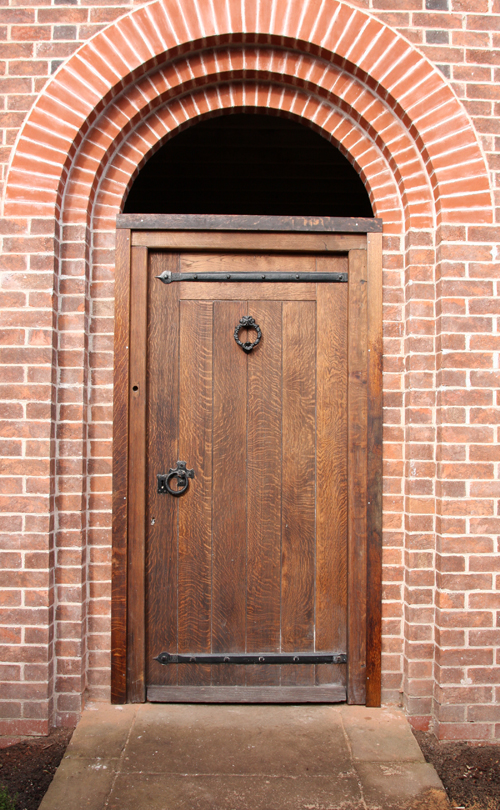