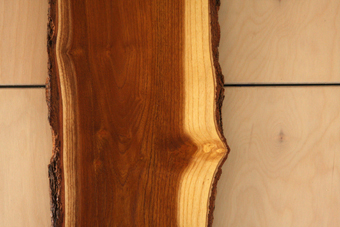 The staircase wall has been adorned with mulberry 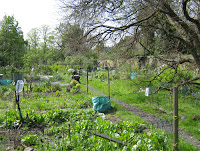 Just before Christmas we made the final move. The Orchard is now our home. Both 'the site' and 'going to site' are things of the past. We have a flushing toilet, a bath, and an operational kitchen, which is quite enough to get by on. There are a few things missing, not least the staircase, so we are currently living on the ground floor and nipping up the trusty ladder for a bath every now and then. 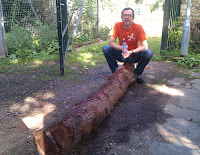 There's a couple of remaining jobs which are best done from the scaffold tower in the stairwell, so we are pressing on with these while we await the staircase. One of them was completed today: decorating the paneled stairwell wall with two 2.5 metre long wany-edged boards of mulberry. Although I like the soft and subtle details in the square-cut birch ply panels, the raw mulberry transforms the wall into something altogether less refined and more eye-popping. Not that the mulberry itself is anything other than refined: it was prized by Georgian cabinet-makers for its rich colour and the striking contrast between its warm heart-wood and bright sapwood. 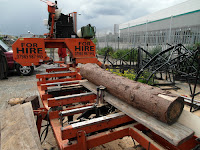 Today, you have no chance of getting hold of boards of mulberry unless you happen to have a personal relationship with a mulberry tree. Our relationship is with a very old tree on our allotment site in Stockwell. The multi-stemmed tree still produces abundant red berries every august but three years ago a couple of stems were removed in order to encourage new growth and reduce the shade on the neighbouring allotment. For a suitable fee, Ford and I got our hands on one of these stems and took it away to become a special component of the as-yet unbuilt Orchard (a difficult task as the log was extraordinarily heavy). The log was milled into boards on a huge machine in east London (see blog no.4) and then dried out for a year and a half. Then, after a couple of coats of Osmo Polyx oil, the journey was almost over.

Today the two longest boards were carefully doweled to the panels on our staircase wall. They are positioned so that they can be touched by anyone going up or down the staircase, which will curve in front of this wall. But how quickly our brains anthropomorphise! Even planks of wood can have faces: there is something about the top of these boards that suggests a couple of rather camp laughing pharaohs. Or am I projecting a little too much? 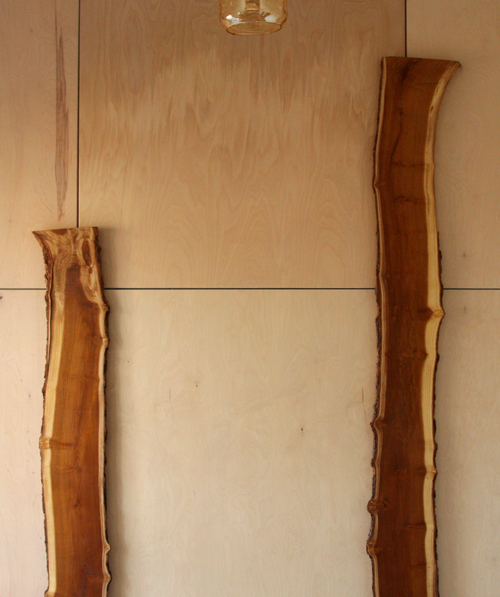