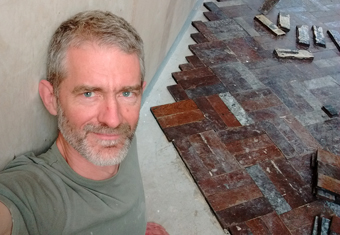 The ground floor is done

Today I laid the final block. It’s done. Phew. It’s been a hell of a job.

Although I ordered an extra 10% from our supplier, Parquet-Parquet, the blocks of reclaimed panga-panga did begin to run out as I glued myself into the final corner. I had taken measurements from drawings, not the room itself, and slightly misjudged what we needed. Fortunately, that extra 10% was just enough to get us there.


The problem with a big room is that it exposes any faults in the initial setting out. Although I thought we had begun with a tidy straight line down the middle of the room, it must have been slightly bowed as on one side of the room the pattern began to open up whereas on the other it got crushed, which meant I had to make a lot of small but necessary cuts to keep the whole thing going. As you can see from the final finished corner, nothing’s going to fall through this basket-weave, at least on this side of the room.

As well as cutting edges off the blocks to make them fit, I’ve also had to saw the bottoms off quite a few. This is because last week Jonnie Rowlandson fitted a metal plate to the sub-floor where his beautifully crafted metal staircase will rise. I then glued the cut-down blocks over this, leaving a couple of gaps so that we can take some of the blocks up again when the floor is sanded, allowing Jonnie to weld the bottom of his staircase to the plate. Hopefully the blocks will go down again in such a way that the junction between the staircase and the floor is seamless.


The floor is still covered with all the grime and peeling varnish from its first life, plus a good dose of dust and muck from us. But we are now one big step closer to The Great Day of Sanding. Just a couple more floors to go. 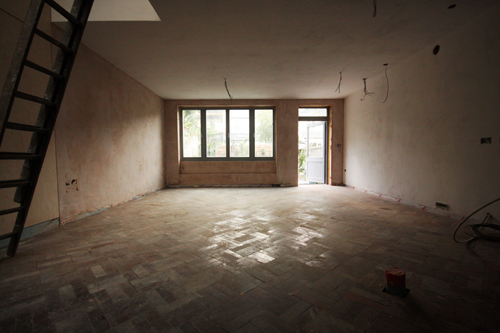