88. And the first shall be last 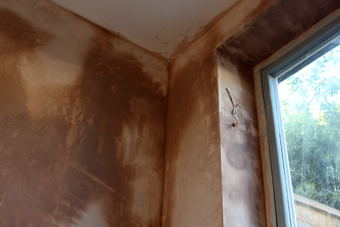 My plastering has improved

I plastered the last major internal wall yesterday: the wall adjacent to the staircase wall in our living room, which will in time be occupied by a television and some rosewood shelves bearing nice ceramic pots. The plastering of this wall has had to wait because the plaster has to meet the panelling on the staircase wall in just the right place, so the panelling had to go in first.

The preparation of the wall took some time, as usual. I lined up the critical edge bead with the birch ply panels, cut out the holes for the sockets, taped up the joins in the plasterboard, and made sure that there were enough screws to keep the board stable on the wall. Plastering is all about timing, so you don’t want to be distracted half way though because something hasn’t been properly prepared.

I’m pleased with the result: the shadow gap next to the panelling is spot on and the finished wall is smooth and free from blemishes that might distract the eye from the Saturday afternoon zombie movie. I also quite like the Friesian cow look but that's just a fleeting impression while it dries out.

I was then confronted by the quality of the plastering of the adjoining wall, which looks out onto the garden. This was the first wall I plastered, back in May. Having gained some confidence in plastering, I am now in a position to admit that my first efforts were frankly a bit rubbish, principally because I made too much use of a sponge when I should have been using a wet trowel for the final finish. So I did it again, and sorted out the window reveals while I was at it. Easy enough - but I better not make a habit of it or this project will never end. 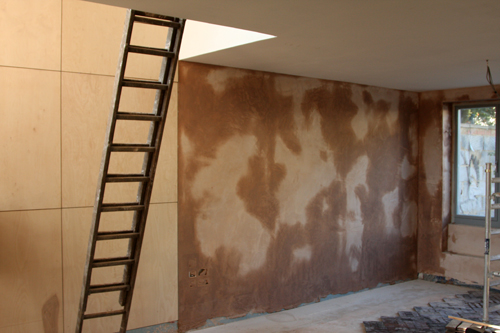