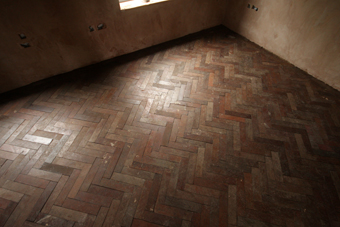 What better way to spend a wet bank holiday weekend than laying a parquet floor? Ford and I have spent the last three says on our hands and knees transforming a dreary chipboard subfloor into something that deserves to be danced on. We used reclaimed blocks, from Parquet-Parquet, so the job was filthy as well as exhausting, but the result promises to be quite lovely once the floor has been sanded and oiled. This is how we did it.

First, we marked out the inside edges of the planned two-block border on the subfloor, using chalk lines. Then we set another chalk line straight down the middle of the floor and glued a column of blocks all the way down this line. This is known as the dragon spine and is designed to keep you on the straight and narrow as you lay the floor.

Working to the dragon line, we slowly and methodically laid the rest of the blocks. Each block had to be cleaned first: a quick scrape down the sides to remove the accumulated interstitial gunk of a hundred years. Happily, the bitumen on the bottoms of the blocks did not have to be removed as the glue we used can cope with it. We glued up to the chalk lines but laid the blocks well over them, creating a temporary ragged edge.

Once the core of the floor was down, we got out the chalk line again and marked out exactly the same lines, this time on top of the newly-laid blocks. We then used a plunge saw with a long guide rail set to the chalk lines to slice off the ragged edges, leaving us with neat straight edges ready for the border. The cut blocks gave us a good preview of the colour of the floor once all the old varnish and dirt has been sanded off: a deep brick-red. Finally we glued down the border, butting it up against the newly cut edges.

You can see that we laid the blocks in the most traditional pattern used for parquet: herringbone. The wood is Jarrah, originally from southwest Australia. Elsewhere we will be using a different pattern and a different reclaimed wood in each room. Once the bedroom floor was finished, we moved a big stack of Lebombo ironwood (native to southern Africa) from the ground floor to the bedroom. This is destined to become the library floor, sometime soon. However we plan to tackle the kitchen/living room floor downstairs first. Although it's great to have our first floor down, we still have some big dragons to slay. 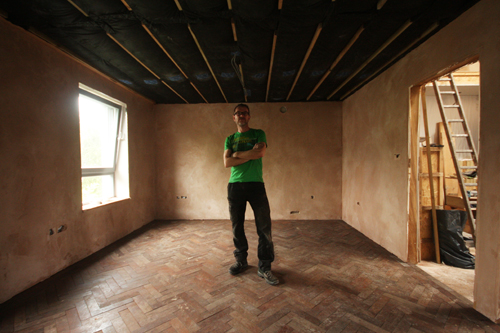