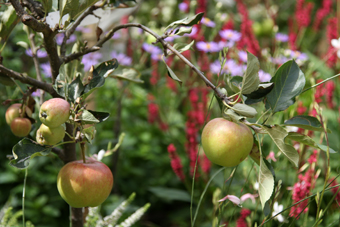 The garden is flourishing, at least

Not a great deal has happened on site recently, principally because we haven't been there. We've been off in Cornwall, having an old-fashioned British holiday of rugged coasts, cream teas and Scrabble. I was back on site yesterday, contemplating the many jobs that still have to be done before we get back to plastering. I'm back in the swing of it now but it's going to be a slow month.

Happily the garden doesn't need our constant input to progress. It just gets on with it. We came back to ripe plums and greengages and the last of the blackcurrants and redcurrants. The autumn raspberries will be next, as well as some strawberries which have decided to have a second flush. The first apples might be ripe in about a month's time. I'm already looking forward to the next round of winter planting, when further fruit in the back garden will be complemented, I hope, by a fully-fledged planting scheme for the front garden, which is currently chock full of building materials.

The garden is also full of bees, which is fabulous.  Right now they are all over the persicaria. What cool insects they are: going about their business with a minimum of fuss while casually pollinating our fruit trees and and increasing the sum of local human happiness. 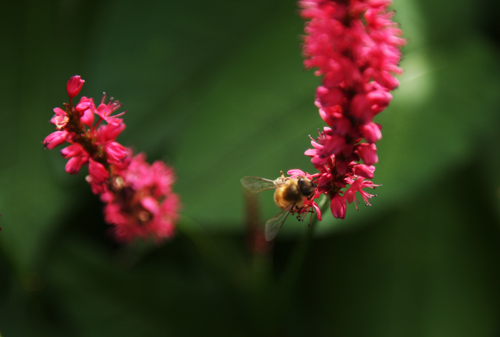