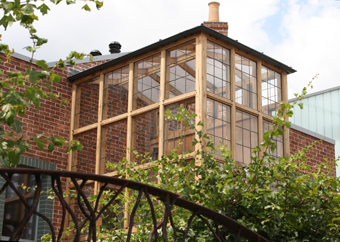 Our scaffold has gone


Exactly a year ago, on a day just as warm as today, a huge truck turned up and emptied its concrete guts into the carefully laid formwork on site, creating the slab on which the house would rise. It was a messy business. Today a much smaller truck arrived and, within a couple of hours, the steel veil that has disguised the front of the house for the last five months had been dismantled, loaded on to the truck and driven away. For the first time, we can stand back and appreciate the form of the house in its entirety. 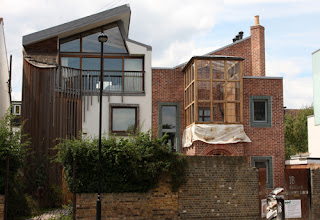 It is, to be frank, quite a funny-looking building. But we always knew it would be. The
constraints of the site were considerable and the design was driven by a desire to create a house that functions well both for us and for the environment. The form follows these functions. We are functionalists following Ruskin, not Corbusier. As Ruskin put it:

‘It is one of the chief virtues of the Gothic builders that they never suffered ideas of outside symmetries and consistencies to interfere with the real use and value of what they did. If they wanted a window, they opened one; a room, they added one; a buttress, they built one; utterly regardless of any conventionalities of external appearance.’

Like the architects of the Arts and Crafts movement, who were inspired by Ruskin, we have been free with the conventionalities of external appearance while also bringing life to the composition with exceptional materials. The curious form of The Orchard is, I hope, rescued by the richness and variety of the materials we have used which distract and delight the eye. Most of all, the greenhouse is now revealed as a shimmering composition of rippling glass, delicate lead and chunky oak, sitting on top its tall plinth of beautifully variegated Northcot bricks. 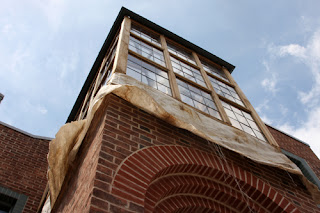 The greenhouse still wears a dirty plastic skirt to protect the bricks and mortar from the leeching oils of the oak. Nonetheless, the view from below, taking in the arch over the entrance, is striking. Here our debt is specifically to Lutyens, and to Deanery Garden in particular. Lutyens liked to transform the conventionalities of external appearance and had a particular fondness for simple geometric forms. Although we are following him in playing with traditional architectural details, the pleasure of the composition is perhaps just the interplay of repeating rectangles and concentric circles.


Before the scaffold came down I took some final photos of details that I enjoy. Here they are: 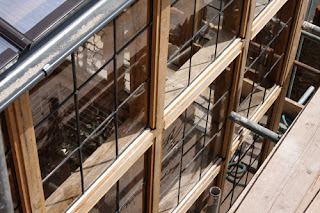 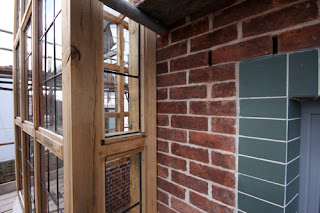 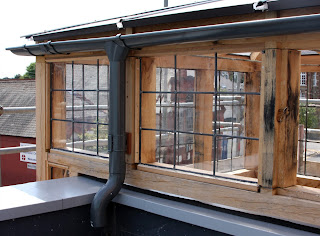 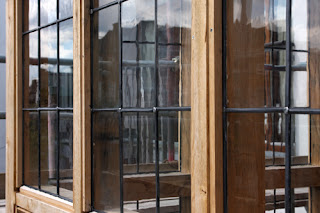 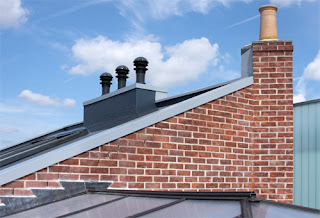 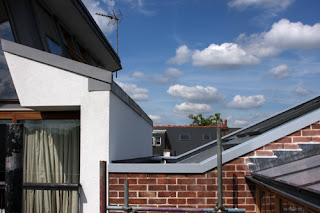 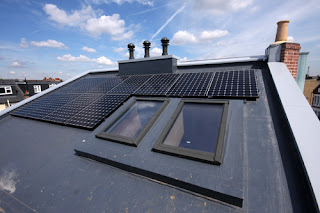