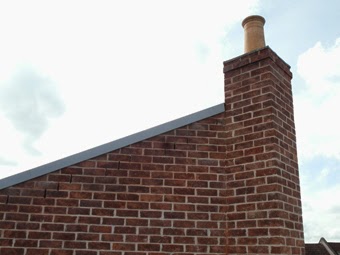 
The architects of the Arts and Crafts movement shared an approach and an aesthetic but not a style book. As a result, their building are remarkably diverse. Yet there is one architectural feature, drawn from the English vernacular, that none of them could resist: soaring chimneys. Philip Webb, who arguably got the ball rolling, built chimneys at Joldwynds that stretched so high above his gabled rooftops that they doubled the height of the house. Edward Prior made the most of them in his full-on decorative extravaganza at Voewood (pictured). And even the restrained Mr Voysey let his hair down and punctured his roofs with chunky form-defining chimney stacks. At Deanery Garden, Lutyens went one step further and turned his chimneys into something truly monumental. 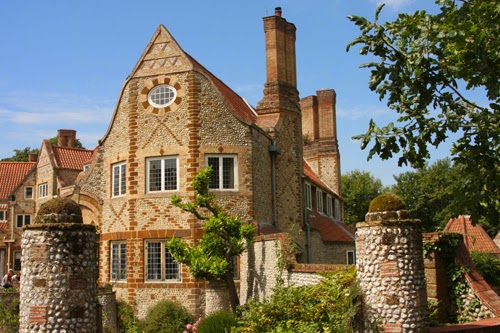 As we are building an exceptionally low energy house, with a heat load that we don't expect to get above 900 Watts in the depth of winter, we definitely do not want a fireplace, or a log burner, or anything else that will make the house overheat in no time at all. So the chimney pot that I installed today sits on the outlet of our soil ventilation pipe, which prevents the water in our sink traps from being sucked down the drain when someone flushes the loo. The pot and the tall brickwork stack that it sits on are without doubt beyond the functional requirements of the drainage system. But who cares? Like Prior, we just want to have fun. 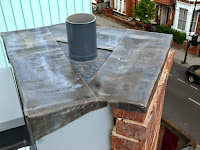 I first had to install a lead flashing over the top of the chimney stack and brickwork. This was one of the many little tasks with lead that I have had to undertake over the course of the build (making me an experienced plumber in the original sense). I have come to enjoy working with lead: it may have caused the huge late twentieth century crime wave that we are only now recovering from, but as a building material its combination of strength and malleability are unmatched. 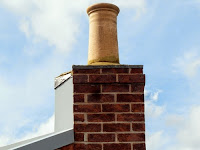 I then plonked the chimney pot on top and dressed it with sand and cement in the manner of all the Victorian chimney stacks I could see from our rooftop. The pot itself is reclaimed. It's quite simple but has a little decorative detail at the top which no-one is ever going to see from the ground. For the birds, you might say, and I hope they enjoy it. 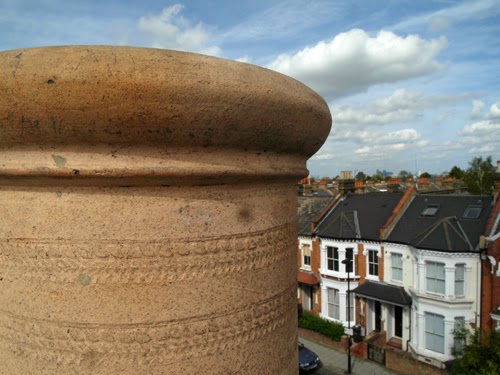