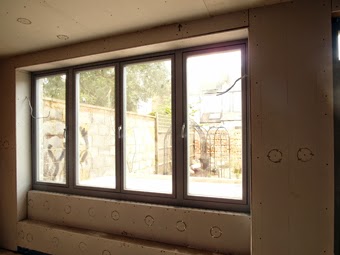 I’ve been insulating the window reveals

Serious-minded eco-builders often make the point that ‘eco-bling’ should be resisted in favour of the boring bits which do the real work, by which they mean old-fashioned insulation and airtightness tape. Well, I already have my diamond earings – the solar panels pumping out electricity on the roof – but I remain fastidious in attending to the boring bits. As we want to live in a properly low energy house for the rest of our lives, with almost no need for heating, I've got to pay attention to these details now.

For example, although our timber frame walls are now full of Warmcel insulation, we have to make sure that there are no short cuts which allow heat inside the house to get around this insulation barrier. It’s all too easy for this to happen at the junction between the doors and the window frames. Unlike the timbers in the walls, which are surrounded by insulation, the window boards which support the window frames are fully exposed to the heat on the inside which they can absorb and direct across the wall. To stop this becoming a ‘cold bridge’, they have to be insulated on the inside before a final finish of plasterboard.

You can see the build-up in these three photos. The first shows the board that terminates the wall and supports the window, with plenty of airtightness tape keeping cold air from coming around the edges of the windows. The next shows the tightly fitting insulation which isolates this board from the warmth of the interior. Finally, everything is covered up with plasterboard, ready for a plaster skim. If this makes sense, you can hopefully also make sense of Peter Smithdale’s drawing of this detail below (drawn from above). The phenolic board is what I have just put in. The fibreboard insulation came attached to the I-beam stud in the wall (which went in last summer) to ensure there was no air gap which the Warmcel wouldn't get to. 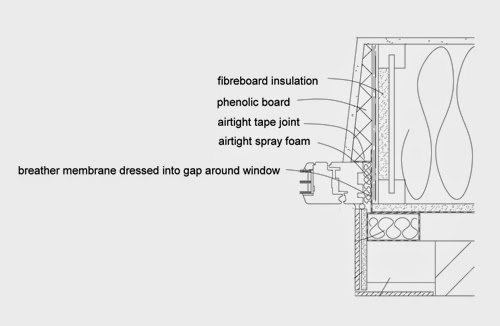 If this doesn’t make sense, you may perhaps have been distracted by the strange face on the wall beyond the window. This is a sketch in left-over bitumen of great Cthulhu, denizen of the deep and green sticky spawn of the stars. We have been considering creating a mosaic on this wall of Cthulhu. I’m especially drawn to the architecture of his home:

Johansen and his men landed at a sloping mud-bank on this monstrous Acropolis, and clambered slipperily up over titan oozy blocks which could have been no mortal staircase. The very sun of heaven seemed distorted when viewed through the polarising miasma welling out from this sea-soaked perversion, and twisted menace and suspense lurked leeringly in those crazily elusive angles of carven rock where a second glance shewed concavity after the first shewed convexity.

But for once we might take the easy option and just render it.