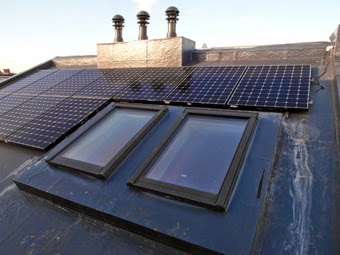 We’ve had our all-important pressure test

A few important dominoes fell this week. The new scaffold at the front of the building, put up for the brickies, has given us safe access to the roof once again. So we could invite Steve the Roofer back to finish a small but crucial weathering detail that could not be completed last September: a little flashing round the roof windows that prevents the rain from getting into the gap between the windows and the roof that it is bolted to. Actually there isn’t any visible gap to speak of – it’s been filled with expanding foam to keep out the cold air – but water always finds a way, given the chance, and we have had a steady and frustrating drip from above for the last four months.

Now that this flashing is in, we can celebrate the completion of a 100% watertight building envelope. And now that we are dry, we can get back to the task of getting warm. 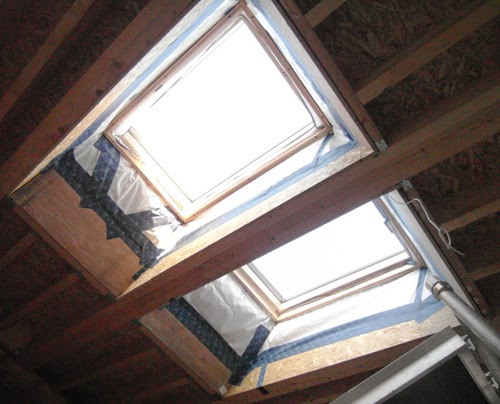 With the roof windows weather-sealed, I could complete the job of making them airtight. As well as the expanding foam in the gaps, there is a plastic collar that is clamped into the internal frame of the window and then taped up to the window reveals, so that any cold air that finds its way through the solidified foam gets blocked. As you can see in this photo, the result is not very pretty, but these reveals will eventually be covered with window boards which we plan to finish with a glittering gold mosaic, a detail that pops up in a surprising number of otherwise rather sober Arts and Crafts buildings (the example here is from a block of flats in Great Titchfield Street). 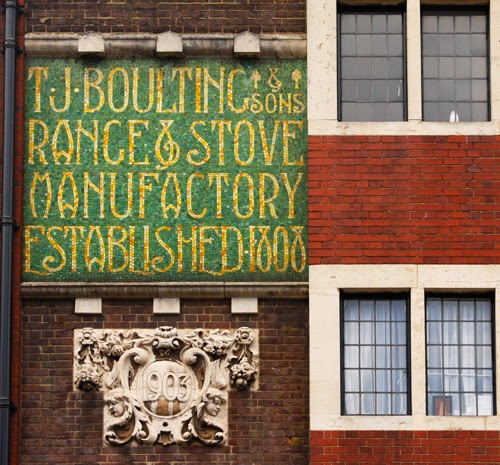 With this airtight collar in place, we were ready to test the airtightness of the whole house, for which we had the support of Mr Airtightness UK, Paul Jennings, ably supported by his brother Duncan. They conducted a pressure test which involved shutting all the doors and windows, sealing up any openings such as waste pipes (which will eventually be blocked by the traps in our sinks and toilets), and installing a fan in the back door, with a seal all around it. The fan was then turned on and the air sucked out of the house. This depressurisation has the effect of drawing outside air into the building through all the cracks and holes that shouldn’t be there if we want a completely airtight building. It’s an incredibly useful way of identifying problems that would otherwise easily get missed.

After we had made a few repairs, Paul and Duncan conducted the formal test and established that, at a pressure of 50Pa (created by the fan), we were losing air through the building at a rate of one complete air change every hour. This is a very good result – Building Regulations require a maximum of 10 air changes per hour in these conditions – and our man from Lambeth Building Control, who dropped by later in the day, was appropriately wide-eyed when I informed him of it. Nonetheless it’s not as good as the Passivhaus standard of 0.6 air changes per hour that we were hoping for. It’s a bit disappointing but I’m not going to sulk about it as the difference will have a pretty negligible effect on the amount of heating we will need.

What’s more, there are more dominoes ready to fall now that this test has been done. We can now start to board up all the exterior walls, after which we will be filling them with Warmcel insulation and then plastering for a final finish, all of which will further improve the airtightness of the building. If you’re concerned that we will suffocate as a result, don’t worry: those sentinels at the top of the roof will provide our heat-recovering ventilation. We will be warm, the air will be fresh and the light will be absolutely fabulous. 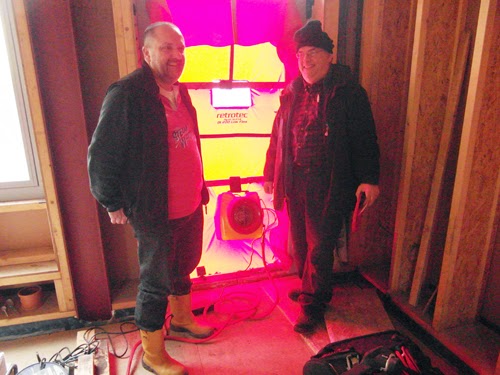