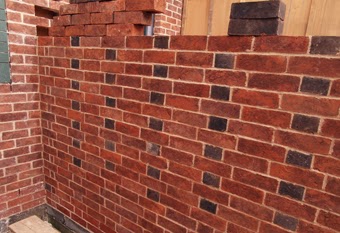 The brickies are back


Around 1920 the creative possibilities of bricklaying took a bit of a hit: we stopped building houses out of solid brick and started using the brick as a finish for cavity walls. The brickwork became a skin, so there was no point in laying the bricks any other way than nose to tail, one after another, otherwise known as stretcher bond. The ends of the bricks (the headers) disappeared from view and the scope for picking out patterns and having fun with bonds was profoundly curtailed. 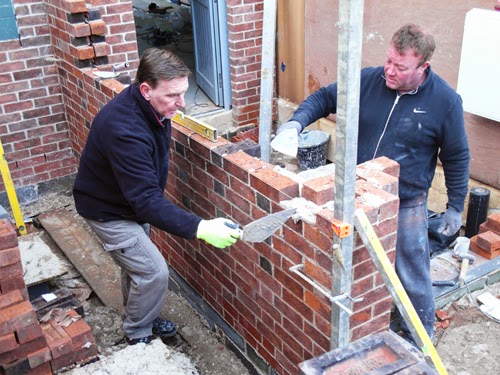 Most of the walls of The Orchard are cavity walls (brick in front of a super-insulated timber frame) in stretcher bond. They look lovely thanks to the richness and patination of our handmade Northcot bricks. But this week we have had a chance to push the brickwork to a new level of sheer visual pleasure. The brickies have returned to build the entrance porch at the front of the house, which extends upwards to the base of the conservatory above it. These two rooms are outside the insulated envelope of the building, so we can build them with solid brick walls. Which means we can build with whatever traditional bond we like. 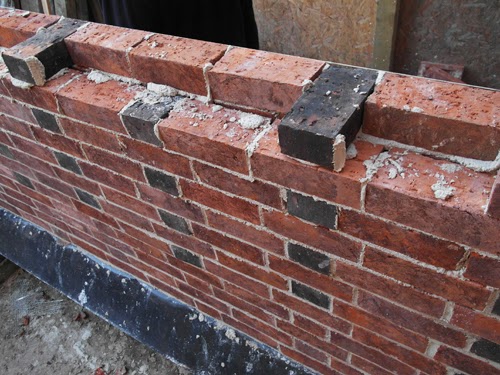 If you look around you, you will see that most
Victorian and Edwardian brick houses are built of either English bond or Flemish bond. English bond is one course of stretchers followed by one course of headers, offset so that there are no straight joints, then repeat. Flemish bond is stretcher-header-stretcher-header on every course, with the pattern offset so that every header is above a stretcher on the course below.

Obviously we are not doing anything quite so ordinary. We are using Flemish Garden bond: a variation of Flemish bond which rather than going dot-dash-dot-dash goes dot-dash-dash-dash-dot-dash-dash-dash. We are also picking out the headers in a much darker brick, creating a simple and attractive pattern. I think of this as Sussex garden bond as I have seen it most often in Sussex and Kent. In fact I was first inspired to use this bond (long before the house had been designed) by the kitchen garden wall at West Dean College, which has the added allure of hundreds of varieties of fruit growing up it.

I'm planning an espaliered pear for this wall, as it faces south. Hopefully the black headers will still catch the eye when the wall is heaving with breakfast.