56. The boarding out begins 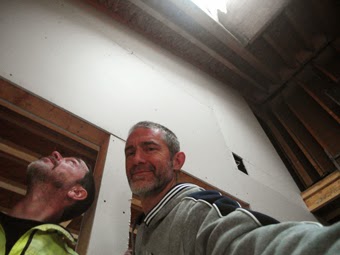 But most of our walls are not yet ready for plasterboard

This weekend we started pinning the plasterboard to the internal walls, heaving, cutting, and screwing in place the all-too-fragile  8'x4' boards. Anything big and cumbersome but also fragile is inevitably easy to damage, so corners have crumbled. Fortunately, however, many of the boards have to be cut, so the evidence of our clumsiness can be shed along the way. Any surviving bungles will hopefully disappear behind the final plaster skim coat.

We really only have one internal wall: the one you can see in this photograph which divides the first floor study and its gallery from the two bedrooms and the loft above them. The two bedroom doors are behind us, so you might expect to see another partition wall beyond them, dividing the rooms. But we have decided to keep things flexible, designing this as one room with two doors and a set of folding doors that will divide the room when we have people to stay. The folding doors should be another opportunity to make something interesting, though right now this task is right at the bottom of my of my to do list.

My to do list is a bit bunged up at the moment. By now, I had hoped we would be pinning plasterboard to the inside faces of the external walls. But we have to conduct a whole-house pressure test first to make sure that there are no holes in these walls through which warm air can escape. And I don't want to do the pressure test until the reveals of the roof windows are properly sealed. And I can't do this at the moment because we still have rainwater coming in the roof windows because the weathering on the roof is not complete. And we can't complete this until the roofers can get safely back up there. But we can't put another scaffold up at the front of the building until the brickies have built the porch, or some of it, as the scaffold would be in their way. And we can't get the brickies back on site to do this until the three brick arches over our front door are on site, and these have to be specially made with cut bricks on concrete lintels.

Brilliant project management huh? Oh well - it's not as if I have ever had an idle moment on site. There's always something to do. And anyway, the arches should be here on Tuesday and the old woman can finally swallow her cow. 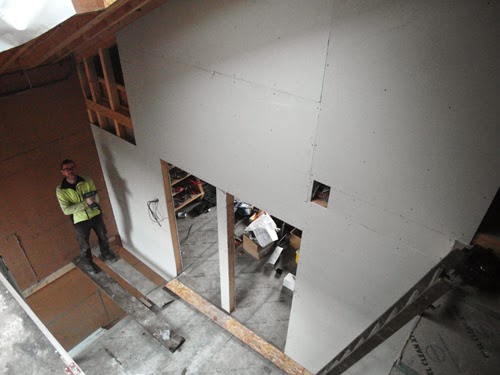