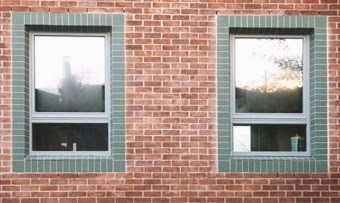 Our scaffold has gone and the building is revealed


Our scaffold went up sixteen weeks ago when our timber framers from Touchwood Homes wanted to start building the first floor. That was the middle of summer and the days were long. It came down yesterday, only one season later. However the light now fails so early that working on the exterior of the building has become almost impossible after 4.30pm.

I say almost - over the last two weeks I have been pushing hard to get everything ready for the scaffold strike, including working in the light of the street lamp at the front of the house on more than one occasion. One of the jobs has been cleaning the spatters of lime mortar off the brickwork, which involves rubbing the bricks with vinegar - a gratifyingly stinky job for the twilight.

Yesterday I had no choice but to stop and stare from the other side of the road as the four guys from Lee Scaffolding dismembered the scaffold before my eyes, unpeeling the delicate steel veil that has shrouded the building for the last three months. The effect was remarkable: the shy and retiring form that has lurked behind the veil emerged as a solid and imposing building. We can at last fully appreciate both the architectural three-dimensionality of the house and the chromatic subtleties of our handmade Northcot bricks, lime mortar and porcelain tiles.

The back of the building, shown here, is much more complete than the front, where we will still have to build the porch and conservatory (that's why there are so many bricks left). Yet even at the back there is a clear distinction between the first floor, where all the tiling is in place, and the ground floor, where the concrete blocks that support the tiles are still in evidence and even the sheathing of the timber frame can be seen below the window, where our raised pond will eventually be built.

So, a great moment, but every milestone in building is really just a pause to draw breath. Although I can no longer keep fit by scampering up and down the scaffold all day, I don't think I'll be putting on weight any time soon. That's one worry of middle age I can safely leave until the house is complete. 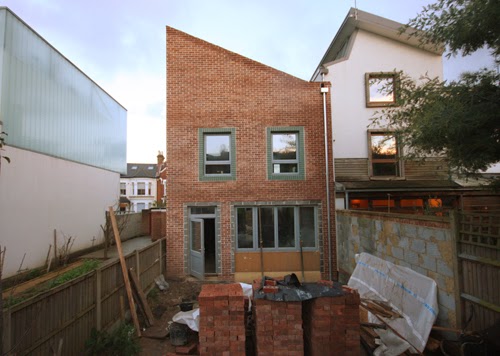