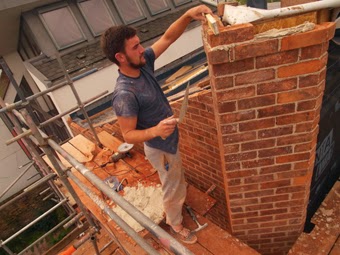 The brickwork is done, for now


We got to the top of the brickwork today. Front and back, our timber frame is now finished in the delicate tones of our Northcot bricks: finely variegated orange, red and silver, held together by the blue-white of our lime mortar. As we approached the top, the bricklayer’s craft was much in evidence. For as well as cutting the long rake of our gable, the brickies also had to build a rather complex chimney, square but offset by 45 degrees from the plane of the wall, which required not only brick cutting but also brick gluing in order to create the right shapes to go round all the corners without any straight joints. A straight joint – two mortar joints, one on top of the other – is the ultimate no-no of skilled brickwork.

So thanks to Dan (pictured), Ray, Joe, Paul, Gill, Steve and Seb of J & R Contractors for their substantial contribution to our Arts and Crafts fantasy home. The chimney is fantastic in every sense for our ultra-low-energy home has no need of a fireplace. The pipe that rises in this rather lovely form is our soil ventilation pipe; perhaps the best appointed soil ventilation pipe in the country. 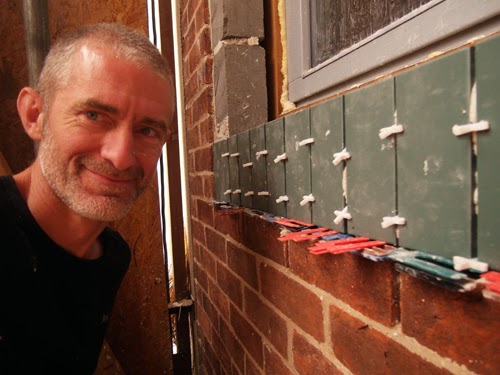 As Dan topped out, I was developing my tiling skills further down the building. The tiles around the windows are going to look great but they are challenging to get right. For example, the tiles below the sill of each window have to line up straight but the top of the line of bricks they sit on is far from straight because the bricks are handmade and so slightly irregular. This is very much part of their charm but it does mean that, in order to achieve a dead straight line of regular tiles, every tile has to be packed above the bricks with a constantly changing combination of plastic packers. Tricky. 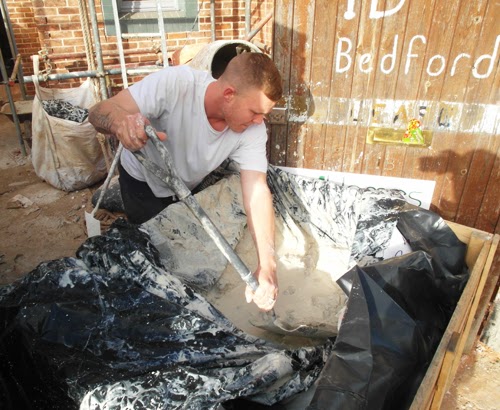 The brickies will be back in a few weeks to complete the porch when the scaffold comes down. When Dan left today, he left behind half a ton of unused lime mortar from Mike Wye in Devon. Happily this will not go to waste for I can just cover the bag and leave it until they come back. As the mortar we have been using is based on a lime putty, it gets delivered wet in gigantic plastic bags, and only begins to go off when it is mixed with a fixing agent and laid, and even then it's a slow process. The brickies were wary at first but have grown to like it, not least because the mixer does not have to be cleaned out every night. Once upon a time, everyone used this stuff. Yet today standard practice is to use high carbon, quick-setting cement that sets so hard that the bricks can never be reclaimed.

Lime mortar and traditional bricks with a super-insulated timber frame and solar panels: why choose between high tech and low tech when you can have the best of both? 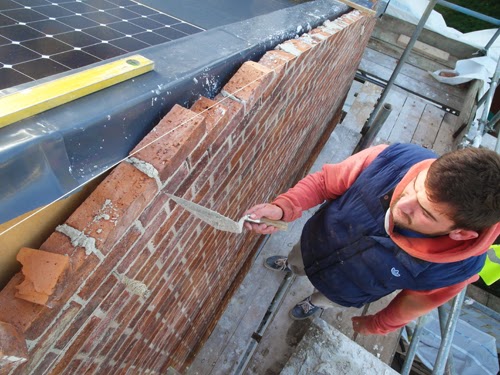