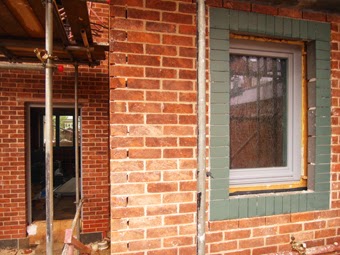 Tiles line up with the bricks

Rain has stopped play quite a lot over the last week as the brickies reasonably don't like getting soaked. Nonetheless, the brick skin of the house, front and back, is rising.

I've just begun the task of dressing the windows with tiles. This is rather a critical detail: every window has tiled reveals and a front-facing tiled surround (in the photo here, the reveals have yet to be tiled). This is rather hard to build but hopefully will be very lovely as well as distinctive. Halsey Ricardo, designer of bonkers Debenham House (green earth to sky blue) would have approved.

It took me a long time to find the right tiles for this job. I wanted something that would complement our orange-red, richly-detailed, handmade Northcot bricks, so I chose a cool blue-green tile (not too saturated so there's no sense of competition with the bricks) that is rich in the depth of its colour but consistent in its finish. They are Portuguese and made of porcelain.

Porcelain is of course made from the same stuff as our bricks: clay. Our Northcot bricks are made of clay from a long-standing Gloucestershire pit, fired to around 930C in traditional kilns. Their variety is affected by where they are positioned in the kilns as well as what sands are added to the mix. In contrast, porcelain is fired at a much higher temperature (over 1200C) and gains its strength and impermeability from a specific blend of minerals within the clay that European manufacturers struggled for centuries to copy from their Chinese masters.

The house looks a bit odd at the moment because the brickies appear to have missed a bit. That's 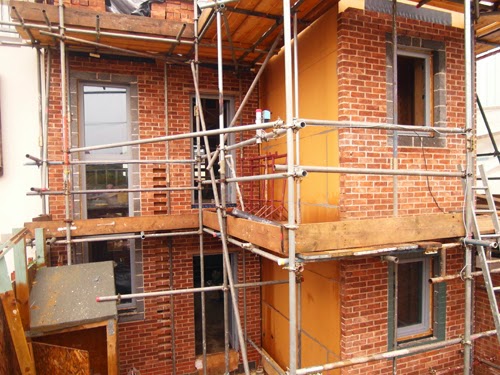 because the wall that links the two front-facing planes of the front elevation will be inside once we have built the central porch and conservatory out of solid brick after the scaffold comes down. The first floor conservatory wall, facing south, will eventually be tiled with tiles made from our very own clay, fired somewhere between brick and porcelain temperatures to create earthenware. I've been using leaves from fruit trees in the back garden to create imprints that can be highlighted with oxides (as in the photo below) and then glazed. Every tile will be made from a unique leaf.

In a week in which Emma Thomson has turned the unhappy John Ruskin into the ultimate Victorian villain - egotistical, patriarchal, impotent - in her film of his doomed marriage to Effie Gray, here's some of Ruskin's radical naturalistic wisdom that I am keen to follow, despite his fallen reputation:


Where nothing else can be used for ornament, vegetation may; vegetation in any form, however fragmentary, however fragmented, however abstracted. A single leaf laid upon the angle of a stone, or the mere form or framework of the leaf drawn upon it, or the mere shadow and ghost of the leaf, - the hollow "foil" cut out of it - possesses a charm which nothing else can replace; a charm not exciting, nor demanding laborious thought or sympathy, but perfectly simple, peaceful, and satisfying. 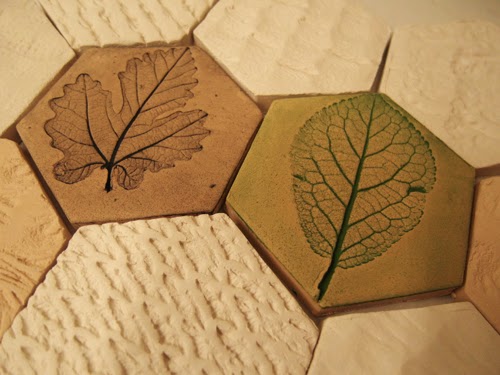