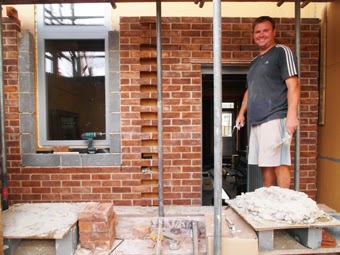 I'm not going to dispute his first sentence. It was a guiding principle of the Arts and Crafts movement that the distinction between art and craft was spurious. W R Lethaby, one of the intellectual leaders of the movement wrote in Art and Workmanship: ‘By art, instructed thinkers do not only mean pictures or quaint and curious things, or necessarily costly ones, certainly not luxurious ones. They mean worthy and complete workmanship by competent workmen.’

Well, I'm happy to say that we have a competent workman on site: Joe Blackwell. The bricklaying has started a little slowly because Joe and his team are rather in demand at the moment. So for the last couple of days it has just been Joe and me. But that's okay - I've been cutting bricks and blocks and keeping Joe in muck while he begins the transformation of our cardboard box into a richly detailed house. It's a great moment. 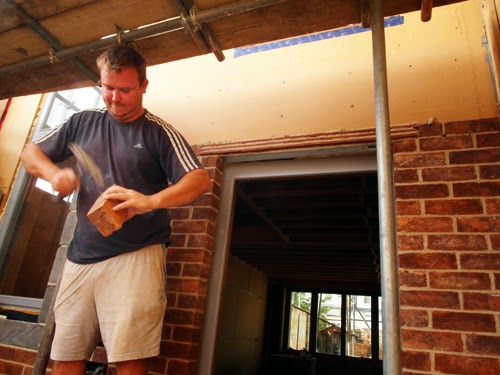 Bricklaying is a precise craft. Every course has to begin at the right level and every brick has to be laid with consideration for how it relates to window and door reveals and all other building details. Our architect, Peter Smithdale, has been thorough in lining up the bricks in the design; Joe is now being just as thorough in making sure that it all works out in practice. 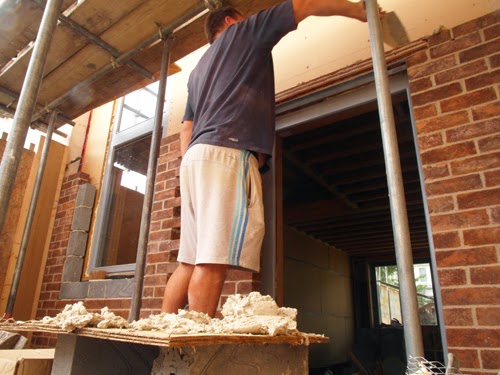 Our lovely Northcot bricks are complemented by a lime mortar supplied by Mike Wye & Associates. A mortar based on lime putty is the most traditional mortar for brickwork. It beats cement in lots of ways: it is much less carbon intensive; it remains flexible and so copes well with movement instead of cracking; and it allows bricks to be reclaimed when a building is demolished.

Joe has his work cut out as the details of the Orchard are particularly tricky. Note the concrete blocks around the windows: these provide a base on to which I will be tiling sometime soon (ish). The artwork that is our front elevation is going to take some time.