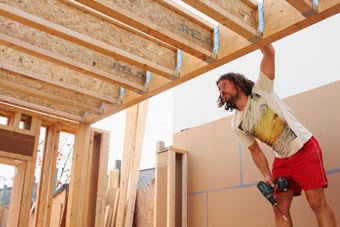 It's time to lay the I-beams down and use them as their designer first intended.

Joists are amazing really. They are just bits of wood, made from carbon dioxide, water and sunshine, yet they support grand pianos, wild parties and amateur gymnastics (currently we have plans for only one of these).

Our joists are chunky I-beams, manufactured by James Jones in Scotland. We are also using I-beams in the walls but they are more commonly used as joists because they are so stable and do not shift, warp and creak in the manner of solid timbers. At the back of the house, these joists span about 5.5 metres, so they have quite a job to do. The picture above of Adam Wilkinson from Touchwood Homes shows him checking out the joist hangers at the front of our living space from within our future stairwell. Creating a gap in the ceiling for a staircase always requires a bit of care to ensure that all the loads are properly distributed. To his right is the bottom half of the opening for the four metre high window at the front of the house where our stained glass will feature prominently (over in Forest Hill we have completed panel five of nine). 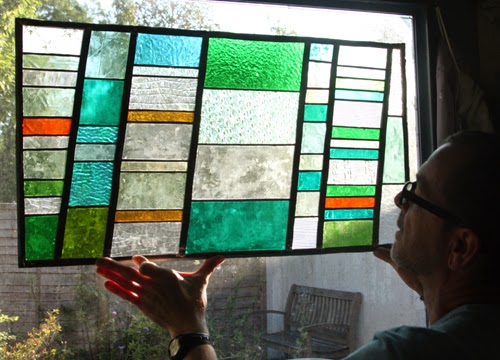 Although the house is going together quickly, because all the pieces are made to measure, there is a good deal of checking and nudging to do along the way. It's obviously crucial to make sure that everything is plumb and level as we progress upwards. Also, as you can see in the picture below, there is a small amount of steel in the building that has to be installed just right - here the steel provides racking strength across the wide windows at the back of the building. The steel is not as deep as the walls and is set back from the outer face of the walls in order that it does not become a heat superhighway.

There are still piles of wood everywhere but now that the ground floor is up, there is much more room to move. However we now have to shift these big chunks of timber up as well as along, so the task is definitely not getting easier. 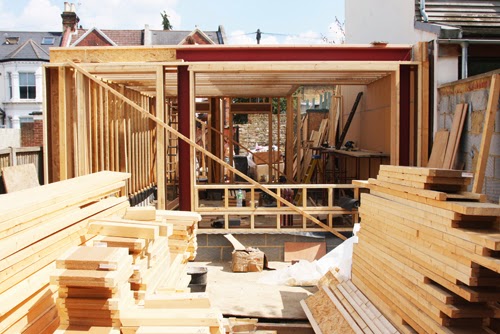