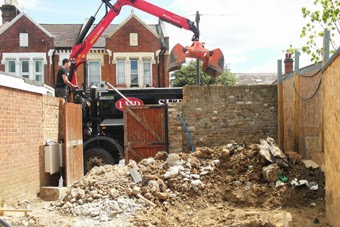 Now I know where all our muck has gone

Yesterday saw the final act of the groundwork: the removal of the spoil and leftover concrete from the front of our site.

Everything had been piling up in this small space – our future front garden – while the final preparations were made prior to the slab being poured. And we were a bit unlucky with the pour itself as we ran out of concrete with only a bit of the slab left to fill. Another truck had to come with a small load, but a load still way too big for what we needed, so the remainder had to be dumped on top of the muck heap. You can’t send a concrete truck home with wet concrete in its belly.

The grab lorry came yesterday and scooped everything up with its amazingly powerful claw. It should be the last one. Quite how many have been and gone since I started clearing the site last autumn I cannot say but enough to fill a very large hole somewhere.

Happily, however, no such holes have been necessary. Muck trucks do not trundle off to landfill sites to tip their loads in holes and pay sky-high landfill tax. Instead they go to other building sites where muck is needed. As long as the muck is clean, i.e. free from the kind of rubbish that does end up in landfill sites, it can be reused immediately. I found out from the lorry driver that our muck has played its part in the creation of a golf course in Kent.

So that’s reassuring: not only are we not throwing stuff away but our waste is being reused in a manner that will increase the sum of human happiness. Thank you for your support, golfers of Tunbridge Wells!