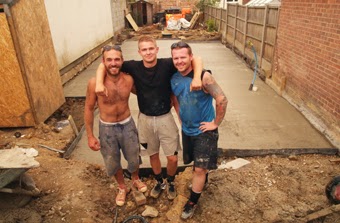 The pouring of the slab is a great day

After weeks of digging, piling, trenching and reinforcing, the slab finally got poured today. This involved a very large concrete pumping truck with a gigantic nozzle on a crane which the guys on site could direct to exactly where they needed it. Three concrete trucks emptied their guts into the pump over the course of the day, creating a tidy grey platform on which our house can rise.

The guys had to move quite fast when the pour was on: Alex steered the spewing nozzle, Greg got to work with a rake smoothing out the concrete and Liam made sure we were on the right level with the laser-guided vertical rule. It looked at times like a nimble dance as they moved quickly around each other, keeping up with the pace of the great upside-down geyser above them.

No rest between trucks: the moment the flow stopped was the moment to get to work with a long level to get the final finish for the slab. We obviously want the finished slab to be as level and accurate as possible, though we have a bit of tolerance to make good any problems as there will be 300mm of insulation on top of the slab before we get to the floor screed.

So, job well done. Thanks to the team from Premier Piling who have been helpful and cheerful throughout, despite an unenviable drive to and from Essex every day. They said that their next job was local so they were really looking forward to a lie-in, i.e. getting up after 6am rather than before it. Such is a builder's life.