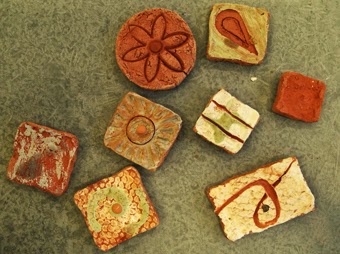 The clay that the piling rig excavated has proved to be top notch. Usually clay has to be washed before it is turned into pots and tiles and ceramics of all kinds but ours is incredibly pure. It's pretty much ready to use straight out of the ground, which makes the plan to tile the conservatory with our own earthen products much more realistic. 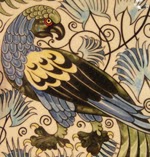 I've had the chance to experiment with the clay at the Friday night introductory ceramics course I have been attending at Morley College. The little collection of scrappily decorated miniature tiles in this picture may not look like much but the key thing is the clay held together and fired beautifully. These tiles were fired at 1000C, typical of earthenware such as terracotta. I will also be trying a higher temperature to see if I can produce more durable stoneware.

Today I prepared a couple of full-sized tiles. It is all a bit like making biscuits. First, the clay is kneaded, then rolled out using a rolling pin. Then a suitable tile cutter is used to make the consistent tile shape and the waste gets scrunched up for reuse. Finally it's time to decorate, which is where the options really multiply.

The master tile maker of the Arts and Crafts movement was William de Morgan, who was inspired both by nature, like all other Arts and Crafts designers, and by the traditional Iznik tiles of Anatolia. At the exquisite De Morgan Centre in southwest London you can see excellent examples of both including  birds, dragons and assorted wide-eyed mythical creatures. But get there quick because it is about to close. 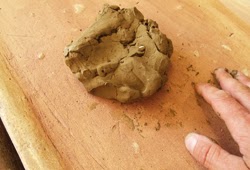 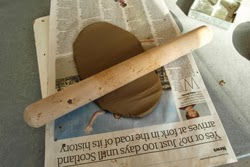 For my two experimental tiles I also looked to nature and the abstract decorative tradition for inspiration. Well, sort of: my first design is a grape, such as Henry Moore might have eaten, and my second design is a cheap-and-cheerful amalgam of a decorative print and a pattern created by painting a slip onto newspaper, laying it on the tile, then peeling it off. 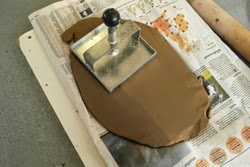 At this stage - the 'wet stage' - I'm just using slips for colour, which are just watered down clays with added pigment. After the first firing, I can add further colours with oxides and then glazes. There are so many combinations and possibilities of colour creation in pottery that I am a tad boggled. Fortunately the conservatory won't be ready for me for a few months, so I have plenty of time to play with my clay. 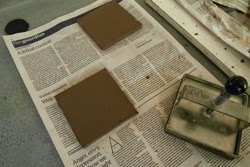 After firing, I expect the grape will look a good deal better, as the exposed clay will turn red-orange, and the patterned tile will look worse. Neither is likely to make it to the final cut but there's a great pleasure in randomly having a go and seeing what comes out of the kiln. 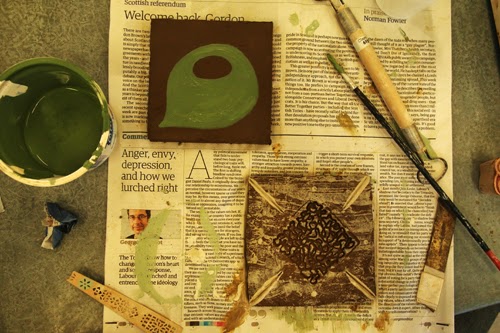