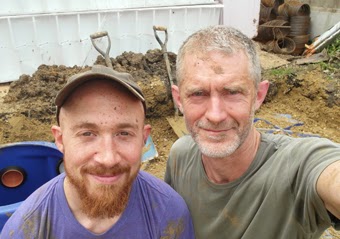 
I've kept out of the way of the team from Premier Piling this week, as they struggled in the rain to dig the hole for our foundations. But they were off today, and the sun was shining, so I took the opportunity to spend the morning on site, putting my back into some serious labour with the help of my cousin, Tom (who doesn't have freckles - that's just mud). 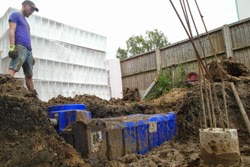 The task in hand was getting the rainwater tank properly installed in its hole at the back of the site. After all the rain, the tank was floating on rainwater rather than storing it, so we heaved the tank out of the hole and set the sump pump going with its tail pointing down our site toilet. Then we had to prepare and level the base of the hole before carefully lowering the tank back in again. 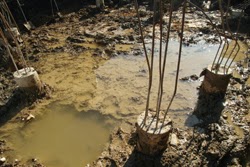 Having just pumped a few hundred litres of rainwater down the drain, we then half-filled the rainwater tank with high quality drinking water from the mains tap, in order to balance the pressure on the sides of the tank while we backfilled it (such are the contradictions of ecobuilding). Finally, we had to barrow two tonnes of ballast from the front of the site to the tank, across the mudfield, and shovel it down the sides, packing it firmly in as we went. 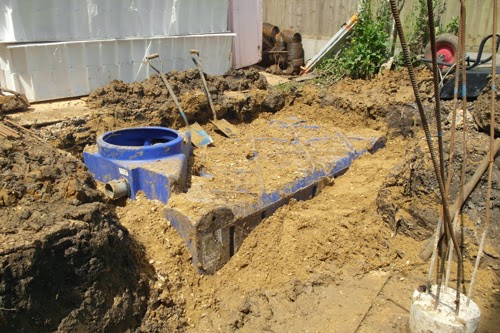