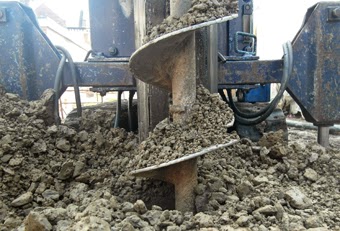 The piling has begun and the geology is looking good 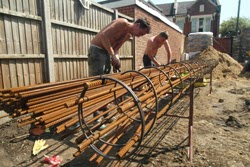 Our first two piles were sunk yesterday, seven metres down in dry, grey London clay. They went in without a hitch which is a huge relief as you never quite know what you are going to encounter when you start digging. No sign of any rubble from the old house that once occupied the other end of the site (see post #6) nor any ground water nor any dodgy wet collapsing clay. Mark the pile-driver said that, on a job up the road, they encountered a seam of wet purple clay that kept collapsing into the holes. Happily there’s no sign of deep purple here. Not yet anyway: there are still a lot of holes to drill. 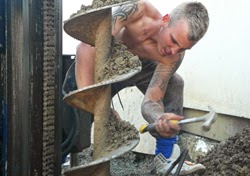 The drilling is done with an augur drill, lined up over the points set out by Wayne earlier in the week, which is taken down into the ground using a succession of interlocking bits, each attached to the top of the last one. As the clay comes up, Randall and Jordan shovel it out of the way, then Mark takes the drill further down. Once the full depth is reached, the drill is removed and a cardboard sleeve popped into the hole to prevent any collapse. Then the long reinforcement cages are inserted with their tops sticking out so that they can be knitted into the slab later on. Finally the concrete is poured down the hole. It’s a surprisingly quick job. 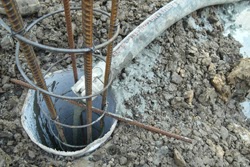 I’m not letting all this freshly dug clay disappear on the back of a muck lorry. A nineteenth century map of the area describes the land opposite our site as ‘brick fields’. This suggests that our clay might be worth putting to use rather than shipping off to another hole. So I’ve been bagging it up and stacking it behind our shed. And last night I took some to Morley College where I have just begun an introductory ceramics class. As well as learning the basics of decorating pottery, I prepared a sample of this freshly dug clay for firing. Hopefully, when I return next week, the results of this test will begin a new journey into craft that will end with a beautifully tiled south-facing wall in the conservatory at the front of the house. It’s got to be worth a try.