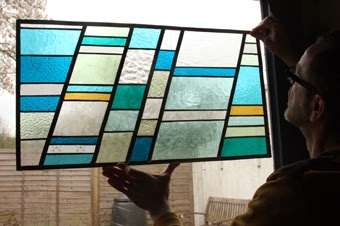 What is stained glass for? Years ago, on a tour of Chartres Cathedral, the guide explained pedantically that the windows were designed to reveal the Word of God in pictures to all the illiterate peasantry. I wasn’t persuaded – I reckon any medieval peasant would just sit back, bog-eyed, and revel in the sheer sensual overload. The figurative function of stained glass is always secondary to this effect, at least when the windows are large.

In London the cathedral of the Arts and Crafts movement is Holy Trinity, Sloane Square. The east window is as glorious and affecting as any great work of stained glass. However it is worth looking closely at the figurative details of this window as they are the work of Edward Burne Jones. In his hands, the characters of the Bible become tender and sensuous, Victorian aesthetes rather than Nazarene peasants.

Edward Burne Jones taught glass-making at the Working Men’s College in Camden, set up by Ruskin among others. The college is still going strong: this week Ford and I finished a five week evening class learning how to make stained glass under the expert eye of tutor Katherine Hewlett. It’s been a fantastic experience because of the speed at which we progressed. By the end of the course, we had completed the first panel of nine that will be fitted into the four metre high window at the front of the Orchard. 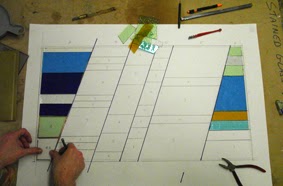 In the drawing of the house at the top of this blog, this window is split into four. In fact, there will be three fixed panes and each (triple-glazed) pane will take three panels of stained glass behind it. The design follows my Lutyens-inspired obsession with circles. Although all the lines in each panel are straight, the overall pattern is an abstraction from the edge of a series of concentric circles. So the overall effect will be of sweeping movement. 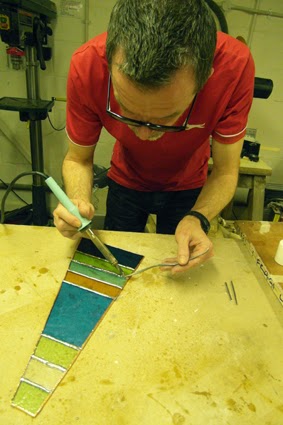 The great thing about stained glass, or strictly leaded glass (it becomes stained when you paint it), is that you don’t need many tools to make it. Just a glass cutter, pliers to nibble off any ragged edges, a soldering iron to join up the smaller pieces after the edges have been wrapped in copper foil, and a fid to open up the H-shaped lead ‘cames’ before putting the major pieces together. You begin with a cartoon drawn on paper and cut the pieces accordingly, scoring the glass along the lines of the cartoon then tapping the ends of the lines to create points of weakness, before snapping the glass in two. Easy really, once you’ve got the hang of it, though designing something non-figurative and abstract with no curving lines proved to be a good move.

One down, eight to go. As well as the movement in the pattern, there will be a subtle shift in colour up the entire window from green to blue, forest to sky, earth to heaven. Hopefully all the visitors to The Orchard, peasants or otherwise, will be bowled over. 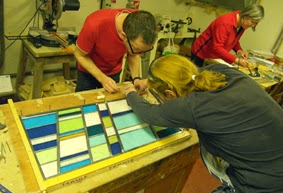