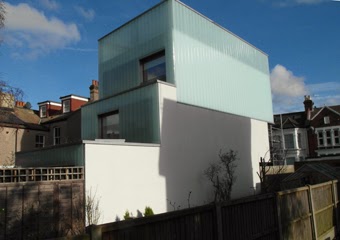 The sun is out so I’m watching where the shadows fall.


As in any orchard, sunlight is going to be critical to how the Orchard works. So I've been observing the mid-winter shadows on our empty plot with interest.. For the design of the Orchard breaks the first principle of solar energy design: make sure your solar panels are well out of the shade. Although solar panels work on overcast days, their performance really takes off when the sun comes out, so blocking the path of the sun is obviously a no-no.

We could have avoided this problem by building higher. Immediately to our south is Tree House, the ecohouse we built nearly a decade ago. The big goal for Tree House was to be energy self-sufficient or ‘zero carbon’. We achieved this by combining a low energy house with a big roof covered in photovoltaic (PV) panels, plus a ground source heat pump to turn the electricity we generated into heat. It’s a fantastic house but its big mono-pitched roof has made the task of designing a solar house next door, to the north, quite tricky.

This time our focus has been on building a house which will have an exceptionally low heat demand. This involves ensuring that the building is super-insulated and air-tight, such that heat will struggle to find a way out (the basic idea of Passivhaus design). But it also includes building a smaller house, a two-storey house rather than three-storey Tree House. As we will be more than happy with a two-storey house, it would be crazy to build a bigger house simply to get high enough for another mega-roof covered in photovoltaic panels. 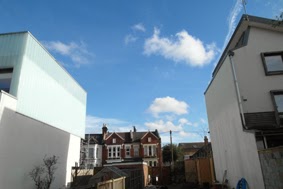 Nonetheless, I’m keen to generate a significant slice our small energy demand on the roof. Which is why I’m alert to winter shadows. The photos here, taken from the back of the site, shows the shadow of Tree House falling on Carl Turner’s minimalist Slip House (two doors up) at exactly midday on the 3rd of February. As the top of the shadow is falling on the junction between the render and the glass of the Slip House, I can map this shadow onto the front elevations of all three buildings (see the drawing below). This tells me that at the sun’s highest point at the beginning of February, our top row of PV panels will actually be getting some sunshine.

I do like a bit of empirical data but you can of course make drawings like this using recorded data on the sun’s azimuth for any given latitude and date. Doing this I have worked out that it’s worth our while having two rows of PV panels. The top row will be completely clear of the shadow of Tree House by mid February and the second row will be fully in the sun by the middle of March. That gives me seven months of full sun on all the panels. These will be the seven brightest months of the year with the sun at its highest, so I am not too upset about the encroaching shade in the other five months. I know that 78% of all the energy made on the unshaded roof of Tree House was generated in these seven months from mid-March to mid-September.

The drawing below suggests that the conservatory will stay in the shade for much longer. But the conservatory protrudes from the front of the house (and crucially of Tree House) and faces east. So it will get lots of sunshine in the morning, which will heat up the brick and tile finishes so that my grapes and peaches stay warm when the sun moves round the back of Tree House. One way or another, the sun's rays will meet our needs, even in the depths of winter.