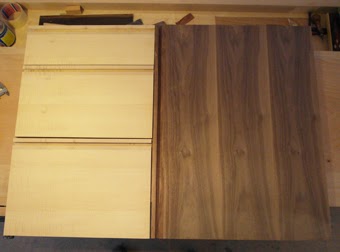 In a world of appearances, we have learnt to be cautious of veneers.

Last week I sold a 1960s teak sideboard on eBay and was asked by one prospective buyer to confirm that it was solid, not veneered. Wood veneers appear to have gained an association with poor quality and pretence which is commensurate with the metaphorical use of the word. We are all wary of people who disguise their true selves behind glittering veneers, though they are usually good company.

Yet veneering is the core skill of the most ambitious furniture makers; it is what distinguishes cabinet makers from other woodworkers. It is a meticulous craft that offers exceptional decorative possibilities, well beyond those of solid wood. If veneers are combined using marquetry techniques, anything is possible.

Elaborately decorated furniture, in the manner of 17th century cabinets, is seriously unfashionable these days. Most people would prefer a mid-century-modern teak sideboard. But if today the tide of fashion flows away from highly decorated furniture, it is not for the first time. Among cabinet makers, there has always been a tension between marquetry-focussed pattern makers and those who want to enjoy the natural patterns in the material itself. Helena Hayward, in World Furniture, is clearly on the side of the latter:

‘Many craftsmen were producing furniture during the early 18th century for the city merchants who could not afford to pay the high prices charged by the fashionable cabinet-makers – and it is furniture of this nature that truly reflects the inherent good taste of the craftsman. Case and seat furniture alike were veneered with matched walnut veneers, and mulberry, yew and other ‘burr’ woods were sometimes used if a particularly striking effect was desired. The sheets of veneer were often laid so that the figuring in the wood formed a symmetrical pattern… Their creations reflect the epitome of good taste in the history of cabinet-making in England.’

Helena’s book was published in 1965, so her rather over-stated judgement is itself an interesting artefact in the history of taste in furniture making. Nonetheless I’m not going to argue with her as, down in the workshop in Kent, I am currently doing exactly what she considers to be the epitome of good taste.

The design of The Orchard’s kitchen follows the pattern established for the shelves described in blog #11: sycamore framed by walnut. This includes a walnut work surface above drawers and cupboards with ripple-sycamore-veneered doors and a prominent floor-almost-to-ceiling double cupboard at one end that is finished in walnut veneer. This week I have been making the doors for this double cupboard.

I had already selected the veneers myself from a warehouse at the far end of the Docklands Light Railway. The freedom to choose your own veneers is one of the great pleasures of being a designer-maker rather than just a keen commissioner. I laid out the veneers and worked out exactly which patterns I wanted to match. I then cut them to size, separating the sheets for the upper door from the sheets for the lower door as it was technically impossible to veneer one big panel and then cut it into two. 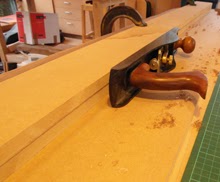 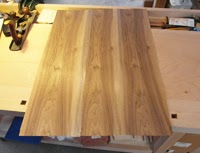 Next I began the task of joining the sheets of veneer for the lower door. This can be done with transparent parcel tape, but only if the edges are exactly flush with one another. So first I had to put every pair of matching edges together in a shooting board (two pieces of wood clamped together with the veneer between them, edges sticking out) and plane them down so that the edges were perfectly straight. This is a tricky job to get right as it involves planning with the plane on its side so that the blade is against the protruding edges of veneer.

Taping the pieces of veneer together wasn’t easy either as I had to pull the edges tight, ensuring there were no gaps where the plywood, onto which I was about to glue the veneer, would show. Then I had to do the same for the upper cupboard door in such a way that I ended up with the same proportions of veneer lined up together as for the lower door, ensuring pattern continuity between the upper and lower doors. Are you with me? Anyway, that bit really wasn’t easy.

After the veneers had been stuck together, I glued them to the plywood doors using a vacuum press (a sealed bag attached to a vacuum pump). I then had to do the whole job again for the backs of the doors. The handles of the doors are 40mm wide strips of solid wood with a door-pull shape routed out of them. So the next task was to trim the veneered doors and attach the handles. I did this using biscuits, little oval pieces of wood fibre that make a strong and simple joint courtesy of a biscuit jointer (a power tool that zaps out just the right size of hole on both pieces of wood). Then it was just a matter of gluing everything together using sash cramps (long pieces of metal with adjustable opposing plates and tightening screws).


I have to say I am quite pleased with the result. The tall walnut-veneered double doors have a repeating pattern that looks a bit like three dancing sprites. Or are they just sagging drapes? Anyway, they should provide plenty of opportunities for Rorschach-style contemplation among guests waiting for their dinner. 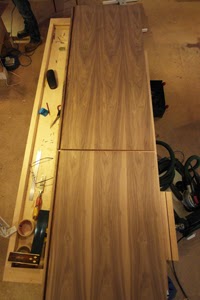