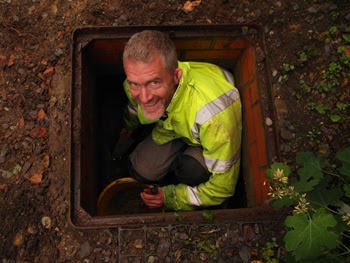 Sooner rather than later, we connect to the sewer.

You may be disappointed to read that The Orchard will not be a perfectly circular ecosystem. Although we will be growing food on site, cooking it with solar energy and composting all the peelings to return to the earth, some of our own personal waste stream will be leaving the site via a sewer, never to return.

Not all of it, mind. The most nutritious part of the human waste stream is the liquid part. I can't really speak for friends and family on this matter but I have every intention of directing as much of my pee as possible onto our compost heap, one way or another. But on a small site in the heart of the city, I know that a fully-fledged compost toilet is not going to be popular.

The more sophisticated compost toilets can cost an arm and a leg, but so can a sewer connection if you have to dig out into the middle of the road. Fortunately we were able to avoid this cost by connecting to the manhole at the front of our neighbours' garden. Unfortunately this involved trashing the garden, as we had to dig a trench all the way across it, but Pete and Sue were exceptionally supportive and let Steve and me loose with the digger. 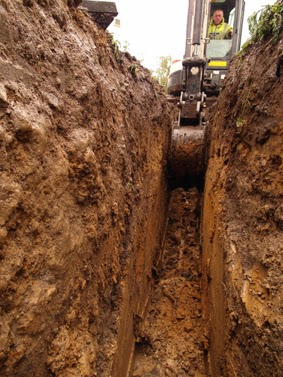 Steve is an old hand at ground works so I was in good company. Our task was to lay a drainpipe across the garden that connected the existing manhole to a new plastic inspection chamber on our side of our mutual boundary. The drains from the new house will connect to this inspection chamber when the house is built.

What's the difference between a manhole and an inspection chamber? That's not a dirty joke. Basically, a manhole is made in situ using bricks and cement whereas an inspection chamber is made of interlocking plastic components that can be quickly assembled on site. Building the former is an expensive and skilled job; the latter is cheap and easy to install. A manhole has to be constructed if the depth of the chamber is more than a metre whereas an inspection chamber is good enough if the depth is less than a metre. Although the gradient of the pipe leaving our neighbours' manhole was only around 1:60, this was just enough to reduce the overall depth to less than a metre by the time the pipe reached our land. 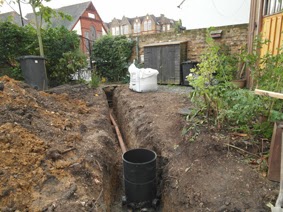 Steve carefully dug the trench using the narrowest of our digger buckets. This was then backfilled with gravel to support the plastic pipes. A little jiggery-pokery was needed with angled pipe junctions to make the connection to the bottom of the manhole and I had the happy job of making it good on the inside of the manhole. It was all a bit of a squeeze but by the end of the day the connection was made and we could pour water into the inspection chamber and watch it pour out into the manhole. However this isn't good enough for Building Control. To get the connection signed off we had to bung up the pipe where it emerges in the manhole and then fill the inspection chamber, and the pipe beyond it, with water. The water did not even shimmy, indicating a well-sealed, leak-free connection and so we got our first certificate from Lambeth Building Control. A happy moment. 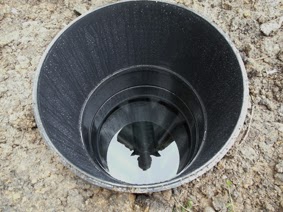 It will be some time before we make the next set of connections to the inspection chamber but in the mean time I can build a privy right on top of it and send the chemical toilet back to its stinky home. The spoiled builders of The Orchard will have a flushing on-site loo from day one.