10. Everything stops except for the rain 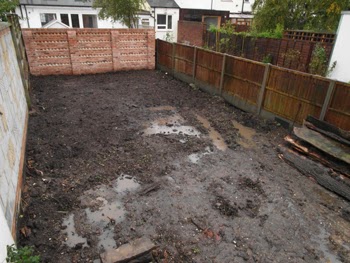 It takes time to line up the ducks before the main event begins.


We’ve now done just about everything we can on site without actually starting to build the house: the services are in, the garage has gone, the site has been cleared, the garden has been dug and the boundaries have been secured. It feels like a good moment to pause and reflect on the task ahead, which is fortunate because we don't really have any choice in the matter.

Before we start building we have to get a few ducks in line. First, there are pre-commencement planning conditions to be discharged. There are also outstanding Building Control issues to deal with. We have to get a contract in place for the ground works. Plus insurance. And, not least, we have to get party wall awards agreed with our neighbours on both sides.

In any tight urban location, the prospect of construction work immediately next door is never greeted with joy. So it’s important to follow the Party Wall Act to the letter. Pissing off your neighbours is always bad manners but is an especially bad idea if you are planning to live in the house you are building once it is complete..

Our neighbours have reason to be concerned. To the south, we want to cut away a large part of the rainscreen of the adjacent house in order to stitch in the new house without leaving a cold void between the two. This makes good sense for them as well as us because their heat losses through the wall will disappear when another warm house is built up against it. Nonetheless, it’s a big ask. On the north side, there is no existing house, only a long garden and garage. From our perspective, our plans don’t seem problematic, but their perspective is another matter. You need a good deal of empathy to be patient through a party wall negotiation.

There is no point in trying to rush this process. And anyway, it’s cold, grey and pouring with rain. The persistent rain is turning our site into a traditional quagmire of thick mud. Except, that is, for the area designated for the back garden. My rather extreme efforts to improve the soil and drainage here (see #08) have paid off. I was careful to improve only the area that we will be planting and not to waste gravel, manure and topsoil on the area that will be paved which curves out from the southern boundary, reaching its maximum depth at the fence on the northern boundary. Sure enough, the area to be paved, like the footprint of the house, is heavy with standing water. Beyond it, the soil is clear. After years of labouring in unforgiving London gardens, I can finally celebrate that most prized horticultural asset, ‘well-drained soil’.