08. The soil is everything 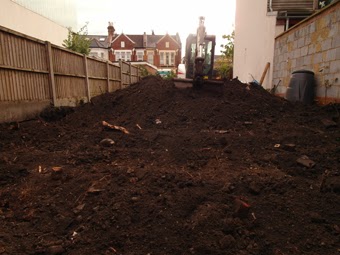 With no house in the way, I seize the opportunity to radically improve the back garden.


The back garden of The Orchard will be small but intensively planted. In time, it will produce plums, damsons and greengages; blackberries lingonberries and tayberries; cherries, apricots and strawberries; raspberries, blueberries and gooseberries; apples and pears; currants of all colours; and a wide variety of herbs planted round a miniature chamomile lawn. There will also be ornamentals and a raised pond where watercress will flourish.

Other than the watercress, none of this is possible without good soil. As any gardener knows, healthy soil is the foundation of successful planting. Without it, regular disappointment is guaranteed. Many people spend years trying to improve their lot, seeking the green-fingered ideal of fertile, well-drained soil.

Well I don't want to spend the rest of my life trying to improve the harsh clay soil of my back garden. There is a thin layer of decent topsoil but below this the soil rapidly turns to dust and then to hard clay. I know that if I do the usual thing and wait until the house is built before starting on my garden, I will never be able to make major changes to what I have inherited. Right now I have a digger and a dumper on site which I can drive between the garden and the front of the site. It's too good an opportunity to miss. 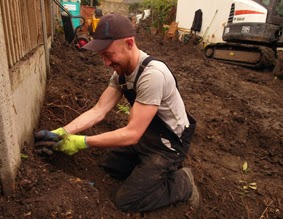 I was helped in this earth-moving escapade by builder Steve and by my cousin, Tom, who is keen to learn the building trade and put his muscles to good use. We began by removing the stumps of old sycamore trees, dragging them out with the digger. They were young trees - weeds that had sprouted in the last five years - but their root balls were still substantial. Then, using a wide bucket, Steve carefully dragged and scooped the decent topsoil to the front of the site, leaving the poor soil exposed. 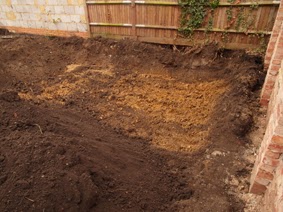 I decided to remove a metre's depth. For a garden six metres wide and 10 metres long, this is a lot of spoil, though the front of the garden will be paved so this area did not need to be stripped. As we dug down into the yellow clay, I was tempted to go even further but I knew that whatever I removed would have to be replaced and this would cost.

The first thing to go back into the hole was a few tons of gravel, to improve the drainage. The rest was made up with bulk bags of horse manure and compost and the topsoil that we had saved at the front of the site. By the end of the job, we had shifted a great deal of muck - poor stuff out and good stuff back. Some might object that this is a bit energy- and resource-intensive but I cannot tell you how delighted I am to have such rich, deep soil for my first bare-rooted fruit trees, which I plan to plant this winter. Now all I have to do is protect the soil from a thousand builders' boots while the house goes up. 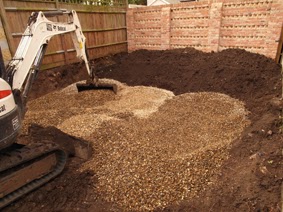 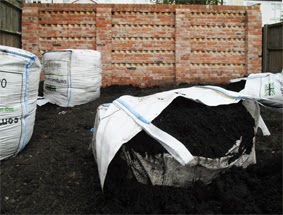