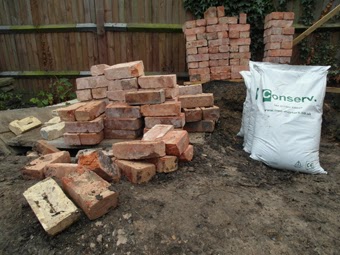 The moment arrives to try my first building craft: brick-laying.


After the hard labour of digging the trench and pouring the concrete for the footings of my garden wall, I can now have some fun with bricks.

Bricks have enormous decorative potential. They are a proto-digital art form as every brick in a wall is like a pixel on a screen, open to manipulation for the good of the overall picture. There’s plenty of scope to get carried away, which is exactly what many medieval bricklayers did, creating wonderful patterns using bricks of different colours. Think of opposing diagonal lines rising up a wall, bouncing off the edges, crossing each other and continuing to weave upwards, creating diamonds and St Andrews crosses and assorted zigzags. The technical term for these patterns is, curiously, diapers, though any connection with north American nappies is lost on me. 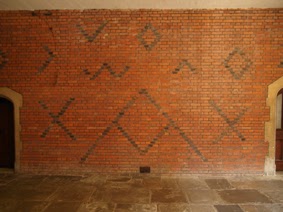 Diapers often go a bit awry such that the patterns don’t repeat properly or end up looking thoroughly wonky. At Hampton Court Palace, perhaps the greatest brick building in the country, the medieval bricklayers evidently just made it up as they went along, often getting bored and changing tack half way through a design. The results are delightful and surprising. There is one wall within the palace which looks just like a game of space invaders.

I can’t claim to be a brickie though I have completed a week’s introduction to bricklaying at Able Skills in Dartford where I learnt to mix mortar, love my levels and set a string to keep on course. Bricklaying looks easy: anyone can lay a few bricks in a row. The challenge is to keep your wall both level and plumb once you have got beyond the first couple of courses. I got to the ninth course of my six foot high wall before bringing in some help: all-round builder Steve, who turned up with proper surveyor’s equipment and set me and my wall to rights. 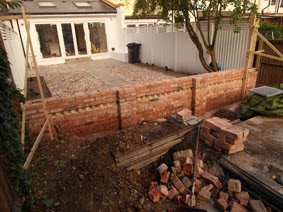 His trick was to use ‘profiles’, vertical wooden battens, fixed at both ends of the wall, with screws set at every planned course of brickwork over which a string can be strung to guide the laying of each course across the full width of the wall. If you set this up accurately using a surveyor’s tripod, you shouldn’t go wrong. 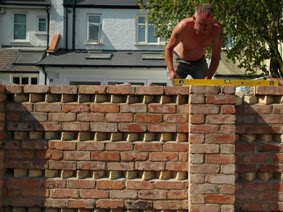 Although I got help for course ten, course nine was the critical one for me. My first three courses were modern engineering bricks, providing a damp-proof foundation on top of my concrete footings. The next five courses were big red reclaimed bricks, originally from a kiln in Sussex but purchased by me from London Reclaim Brick Merchants. For the ninth course I also used reclaimed bricks but this time they were white bricks with an East Anglian provenance. With the change in colour, I also changed the position of the bricks, laying them at an angle across the wall and so creating a sawtooth effect to contrast with the flat plane of the red bricks.

We then laid three more courses of gum-red bricks before repeating my white teeth at every fourth course. At the top of the wall we curved the piers in and finished the wall with a coping of red soldiers, laid on their sides but standing to attention.

It took me three weeks to build this wall, including hand-digging the trenches and pouring the concrete footings. It was a lot of effort but the result is striking and characterful. Furthermore I intend to make full use of the heat-retaining qualities of brick by growing fan-trained cherries and apricots in the three bays defined by my four piers: a sour morello cherry in the shady southern bay, a sweet cherry in the middle bay, and an apricot in the sunniest northern bay. I’ve already ordered the plants from a nursery in Yorkshire for winter planting: they will hopefully be flourishing, if not fruiting, well before the house is finished. 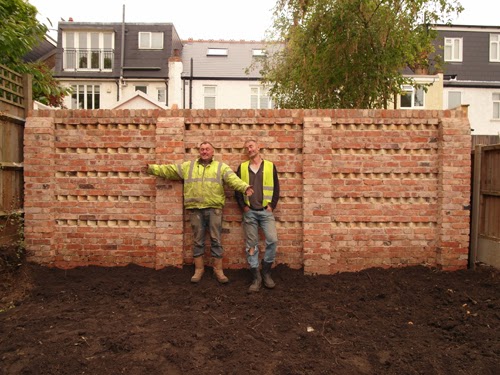