06. Digging deep into the history of the site 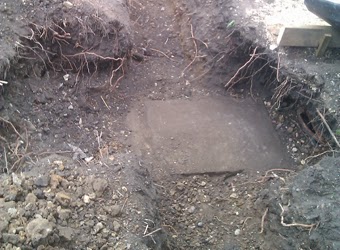 The construction of a garden wall begins with deep footings. Excavating with a pick-axe exposes some unexpected fragments of the past.

Our building plot was cleaved from the garden of a house that is currently being renovated by Sara, its new owner. The boundary between us is a flimsy wooden fence that I have long promised to replace with a high brick wall. As Sara’s renovation will soon be complete, it’s time I delivered on my promise.

The construction of a six metre wide, six foot high brick wall is quite an undertaking. For starters, you need serious footings. So I began the task by tearing down the fence and attacking the hard, dry ground with a pick-axe. Arguably, this is a job for a mini-digger but the site is tricky – Sara’s builders are busy on the other side of the boundary – and I can save some money doing it by hand.

Two days later, I am still digging. It’s hard work but now that my muscles have got used to the unfamiliar demands being made upon them, the initial exhaustion has given way to a sense of rhythm that sustains the continuous exertion. Keep going; keep digging; and little by little the trench deepens.

Almost two feet down, well below the transition between topsoil and clay, I hit bedrock, or so it seems. Scraping away with my shovel I uncover a large York stone paving slab, similar to the assortment of flagstones that littered the site when we bought it. Previous digging on site has brought up lots of broken pieces of stone but this slab is not only intact but perfectly laid and clearly hasn’t been moved for a very long time. Digging a little further, I find another immediately next to it.

I realise that I have uncovered a fragment of Holly Lodge, the Victorian mansion that once occupied the site now taken up by five terraced houses and five gardens-cum-building plots. I know about the Lodge from old maps of the area and the original planning consent in 1922 for the terrace, which required the demolition of the house, but I have always assumed that no trace of it remained. Yet here I am, standing on flagstones that, given their depth and their position in relation to the original house, were probably part of a basement or scullery.

I kneel on the stones and touch their rough surface, and the history of the house – the men who built it, the families who lived there, the servants who cooked and scrubbed and laboured for a pittance, the men who smashed it to pieces – flickers through my fingertips. I look up and my mind’s eye meets the beleaguered eyes of the scullery maid who is also on her knees with a hard brush, a bar of soap and a pail of cold water.

Because the business of building usually starts out with demolition and site clearance, it is all too easy for a site to be drained of its genius loci, its spirit of place. But you don’t need to look far to rediscover this. It’s there in the surrounding buildings, the fabric of the streets and boundaries, the people, the old maps, the soil, and the materials that the site gives up.

I levered the flagstones out of the hole and added them to the stack of slabs that came with the plot, slabs that had evidently already been recycled once, saved from the destruction of Holly Lodge and reused in the new gardens of the terrace. I shall follow the tradition and lay out our new garden using the same stones. The scullery maid’s preservation of these billion-year-old pieces of rock will not be in vain.